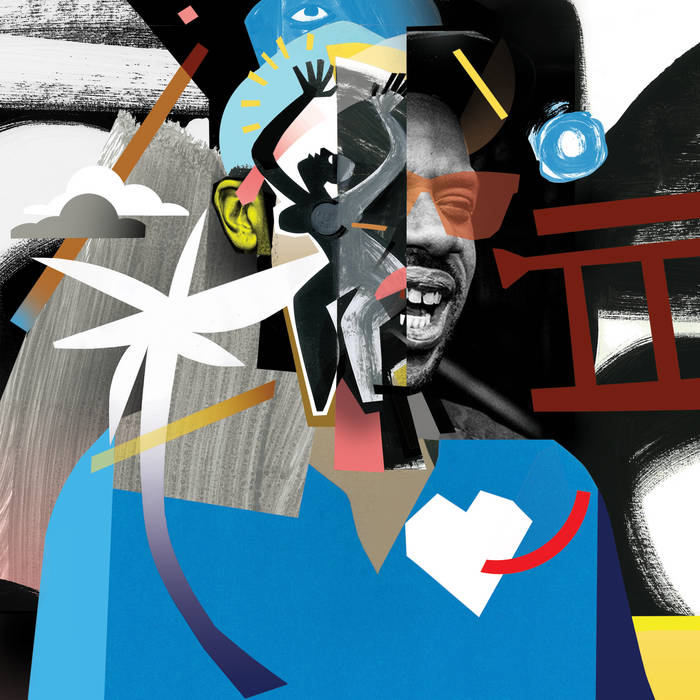 eclecticus amazing. Saw a concert in Brussels this evening - what a blast. Delicate, positive, warm. To be cherished!

Rob O. Wow, this album just feels good! With the West Coast Get Down you can't go wrong. The musicianship on this project is phenomenal! Favorite track: World on Wheels.

Force For Good was methodically captured across different locations in LA, with Ryan Porter scheduling all sessions between the window of 10:00 am and 3:00 pm. Sheet music and general instructions were brought to the studio, with Ryan Porter giving the players freedom to explore around the plotted transitions and changes. Three takes were recorded for each composition, selecting the best version and compiling the music around a rigorous schedule of studio sessions, writing, and touring over the last five years. Telepathic like communication from their extensive years working together, their togetherness sparked the energy for another worthy contribution to the canon of 21st-century jazz.

As the follow-up to Ryan Porter's debut release Spangle-Lang Lane and his sophomore album The Optimist, recordings initiated at Kamasi Washington's parents' house in the infamous space known as The Shack. As the epicenter of foundational sessions from the WCGD and the rotating cast of members around the group, The Shack was also home to recordings for The Optimist. Force For Good marks an important turning point in Ryan Porter's career, mostly captured during the same year that he contributed to Kendrick Lamar's critically acclaimed LP To Pimp A Butterfly and the core members of the WCGD were ramping up for the release of The Epic on Flying Lotus' Brainfeeder. After the initial recordings at The Shack, Ryan took a unit of colleagues to Pasadena, tracking at legendary jazz trumpeter Nolan Shaheed's home studio. Next was the Red Gate Studio in West Los Angeles with Raymond Richards engineering. Final recording sessions were held at Josef Leimberg's Iron Works Studio in Eagle Rock. Mixing and mastering were conducted at Cosmic Zoo studios by Daddy Kev, owner of World Galaxy/Alpha Pup Records and engineer for all of Kamasi Washington's releases since The Epic.

Sourcing the title from an interview passage by John Coltrane during the '60s, Ryan Porter's Force For Good is an album created with deep purpose and conviction towards humanity. Ryan Porter adds, "I was doing research on John Coltrane when I came across an interview of him being asked why his music seemed to attract many different types of intellectual, philosophical, and spiritual people. He stated that he made some changes in his own personal life that made him question his purpose on this earth. In the course of thinking of his purpose on this earth, he noticed that in this life everyone is faced with a decision and that decision guides what your contribution to this world will be. He thought to himself there is so much evil in the world and so many people are making the choice to become a force for evil. John felt making a choice to be a force for good would not only help his life but make his music the film score for the people who choose to force for good no matter what the conditions are. The Force for Good album is my contribution to the legacy of John Coltrane’s message of peace, love, and unity through music."

The album's opening piece, "Madiba," is a flourishing introduction that plays heavily into the album's overarching theme, created in dedication to Nelson Mandela. Brandon Coleman lays down a beautiful cloud of Fender Rhodes, with Robert Miller colorfully displaying a unique fusion between jazz and soul behind the drums. Every player defines themselves within Ryan Porter's arrangement, finding a oneness that is felt across every track on the album. It's one of five songs on the record that stretches over the 9-minute mark, with a bulk of the material rooted in vamps, dynamic bridges, transitions, and overlapping moments. Force For Good's debut single, "Heaven Only Knows," transitions the record into its most spiritual and visionary form, featuring Solange collaborator Nia Andrews and Kendrick Lamar collaborator, and fellow World Galaxy artist, Josef Leimberg. It's an entirely new sound in comparison to his past works and is one of the crowning moments of the record. "Maggie" bursts with magnificent energy and deeply passionate resonance, dedicated to his mother as a critical and inspirational force through his life. Lacing his trombone with a wah-wah pedal for one of the album’s most memorable moments, Miles Mosley also stretches out for a spellbinding upright bass solo, giving the music a distinct feel that really magnifies the records' conceptual purpose. The interpolation of Stevie Wonder's "Blame it on The Sun" from the 1972 LP Talking Book is another example of the glowing force of energy that navigates through the core of Force For Good’s identity and shows his love for ballads. Stevie Wonder was an important vehicle for fusion across a plethora of genres and Ryan Porter's vision has become the same with a release like this. The dreamy state of Chicago based Rotary Connection's "Memory Band" from 1967 has been given the WCGD update with finesse and poise, exploring the core of the original track with incredible piano contributions from Brandon Coleman and elegant horn lines from both Kamasi Washington and Ryan Porter.

With Miles Mosley performing a bulk of the album's bass lines on the acoustic side, Thundercat's electric bass addition to "Carricou" emanates the same kind of powerful yet restrained and focused energy that made Ryan Porter’s sophomore record, The Optimist, revered across the world. Driving the pulse of "Carricou,” Thundercat's bass solo is a remarkable testament to his sonic connection across the jazz spectrum. Force For Good's somber and peaceful "Mesosphere" has a one of a kind moment, with Kamasi Washington performing on soprano. It's a tone rarely heard from the sax giant, slowing the pace and energy of the album down. Brandon Coleman lays down a stunning riff on the Fender Rhodes to cap the song off, taking flight with his flavorful approach. Ryan Porter takes things into his own hands with the multi-layered trombone interlude "Neves," presenting his first solo recording with effects and overtones abound. One of the most impressive moments for the low-end section comes in the form of Miles Mosley’s bass work on the original Ryan Porter composition “World on Wheels.” Funneling the acoustic bass into a field of effects pedals, Mosley runs through massive note lines with lightning speed and precision, bringing out the type of fiery inflection that makes his live performances unforgettable and turns the acoustic bass into a monstrous beast.

Jumaane Smith returns after his appearance on The Optimist and his trumpet lines on “Oscalypso” are miles ahead, stamped with a rapid-fire run of notes that ricochets off the driving rhythm section with power. The LP catapults into the outer regions of the atmosphere on the closing cut "People Talk." An original composition from bandmate Cameron Graves, the song's muscular and driving force is stretched out to the 13-minute mark and is a song Ryan Porter describes as a futuristic action movie. After Kamasi Washington rips through a multitude of notes and chords, Ryan Porter commands his way through an exploratory and expressive solo of his own that is another crowning moment of the record. Every piece on Force For Good is compelling in its uniqueness yet connectivity to the whole, collectively glued to the spirit of John Coltrane's design for music's purpose during the last chapter of his life and the legacy of LA music as it continues to experience a creative apex in the 21st century.

Force For Good serves as a time capsule of Ryan Porter's ascension into the ranks of the most elite players in the modern landscape of jazz and beyond, initiated during a time when his career began to transition towards another plane. Force For Good lands on digital platforms June 14, with physical pressings to follow later this year. Along with the new album, Ryan will join Kamasi Washington's live band as they embark on an opening tour for legendary composer and keyboardist Herbie Hancock this summer. This will be followed by his own tour of Europe and the UK to present music across his first three albums.